Syndicate Bank staffs are ‘thrilled’ that their bank has been chosen to maintain and operate an account named ‘Army Welfare Fund Battle Casualties’. All the donations received in the fund will be utilised to provide financial assistance/grant to widows, next of kin or dependants of Army personnel who have lost their lives in battle. Check for Details here.

Honoured to be chosen to manage an account designed for such a noble purpose, says bank official

Staff are proud that they get to manage the account designed for such a noble purpose. The Army Welfare Fund Battle Casualties account has been opened at Syndicate Bank’s Defence Headquarters Branch, South Block, New Delhi. The IFSC Code is SYNB0009055 and the account number 90552010165915.

Initially the account was opened ‘post the Siachen tragedy in which 10 Army men lost their lives due to an avalanche, there has been a groundswell of sentiments across the nation towards the contribution of the Army.’ 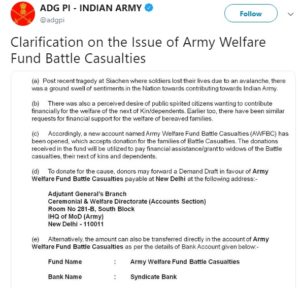 There was also perceived desire of spirited citizens wanting to contribute financially for the welfare of the next of kin of battle casualties.

The issue was debated upon in consultation with the Ministry of Defence, leading to opening of the account ‘to provide financial assistance to next of kin/widows/dependants of battle casualties.’

How To Register for Jio Giga Fiber Broadband Services ?

How To Apply For Syndicate Bank’s Cheapest Credit Card EMI at 14% ?